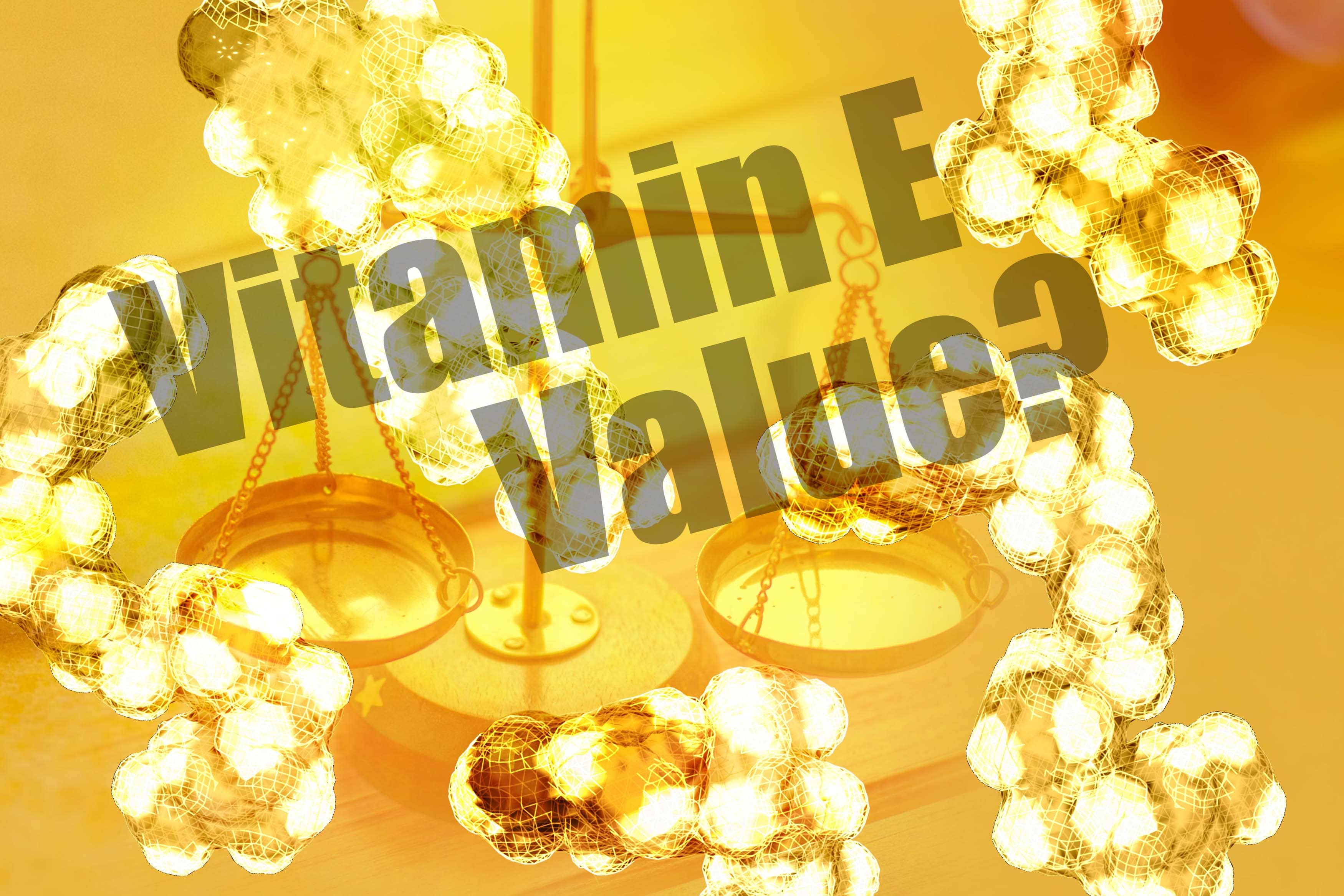 See this article for the Vitamin A value from carotenoids.

Note: To calculate the vitamin E value for different tocochromanols, see the Vitamin E Value Converter for tocochromanols. (Login to Google and create a copy to use)

Note: Chemical stereoisomers are chemicals with the same chemical formula and molecular skeleton, but with a different spatial arrangement.

Up until the 1960s, synthetic dl-α-tocopherol was synthesized from natural phytol, which produced a mixture of two stereoisomers of α-tocopherol. However, since the mid-1960s, and up to the current day, synthetic α-tocopherol has been produced from synthetic isophytol which produces a mixture of eight different stereoisomers (RRR-, RSR-, RRS-, RSS-, SRR-, SSR-, SRS-, and SSS-α-tocopherol). [8] In 1973, in recognition of the stereoisomeric differences between these synthetic preparations, the IUPAC-IUB Commission on Biochemical Nomenclature abandoned the d- and l- prefixes, and replaced it with the RS naming system. The naturally occurring isomer known as d-α-tocopherol, was assigned the name RRR-α-tocopherol. [1] Synthetic vitamin E from natural phytol was renamed as 2-ambo-α-tocopherol, and synthetic α-tocopherol from synthetic isophytol was renamed as all-rac-α-tocopherol. [1] By 1980, this updated nomenclature was adopted by the International Union of Nutritional Sciences and the American Institute of Nutrition. [9] Any modern usage of the d- or dl- prefix for α-tocopherol is outdated, and shall be interpreted as RRR- and all-rac-α-tocopherol, respectively. [2]

The international unit (IU) is a measurement unit used for substances that have similar biological properties, but different biological potencies. Thus, an “IU of vitamin” E sums up the total quantity of “vitamin E activity” from the different forms of vitamin E. The IU for vitamin E is defined as the activity of 1 mg synthetic α-tocopheryl acetate in the rat fertility assay; i.e., an IU being the quantity “... which, when administered orally, prevents resorption-gestation in rats deprived of vitamin E.” [1] [7] Thus, the milligram amount required to match the biological activity of 1 mg synthetic α-tocopheryl acetate is equal to 1 IU of vitamin E. [9] By the 1960s, several researchers had published the biological activity of various tocopherols and tocotrienols (and isomers) as determined by the rat fertility assay. [10] [11] (Table 1)

In 1968, the Food and Nutrition Board proposed 30 IU of vitamin E as the recommended daily allowance (RDA) for humans. [12] Although the Food and Nutrition board acknowledged the vitamin E contribution from vitamers other than α-tocopherol, at that time, only α-tocopherol was included in the dietary calculations due to the lack of analytical data on the food supply. [12] [13] It was not until 1979, that the USDA published the first compilation of tocochromanol content in foods, which included quantification of α-, β, γ, and δ-tocopherols and tocotrienols. [14] However, the conversion of mg quantities to IU quantities often led to confusion. [9] In 1980, to simplify vitamin E calculations, the US Food and Nutrition Board abandoned the IU for expressing vitamin E value and recommended vitamin E be expressed in milligrams of α-tocopherol equivalents (α-TE). [9] [15] The following equivalencies were recommended, which were based on the tocochromanols with the greatest biological activity in the rat fertility assay:

Despite this guidance by the Food and Nutrition Board, ‘milligrams of α-tocopherol equivalents’ never appeared on food or supplement labels because the IU value for vitamin E was codified in the Code of Federal Regulations (CFR) for food labeling. [16] From 1973 to July 26th, 2016, the % Daily Values (%DV) seen on the Nutrition and Supplement Facts panel had to be based on the Reference Daily Intake (RDI) of 30 IU vitamin E, which was derived from the 1968 Recommended Dietary Allowances (RDA). [12] [16]

In 2000, the Food and Nutrition Board decided to further simplify the calculation of vitamin E, and replaced the calculation of α-tocopherol equivalents, with milligrams of α-tocopherol. [19] With this new definition, the only form of vitamin E that counts towards the “vitamin E requirement” is the natural RRR-α-tocopherol, the synthetic 2R-stereoisomeric forms of α-tocopherol (RSR-, RRS-, and RSS-), and their esters. (Table 1) [19] With the IU format, all tocochromanols counted towards the vitamin E value based on their activity in the rat fertility assay. However, the new definition excludes all novel forms of vitamin E because “they are not converted to α-tocopherol in humans and are recognized poorly by the α-tocopherol transfer protein”. [19] This arbitrary designation disregards the unique, and perhaps necessary, biological functions of other tocochromanols in the vitamin E family. [20] [21] [22] [23] [24] [25] [26]

Despite this shortcoming, the FDA adopted milligrams of α-tocopherol for the RDI of vitamin E, which replaced the IU in 21 CFR § 101.9(c)(8)(iv). [27] The rule became effective on July 26th, 2016 with a final compliance date of Jan 1st, 2021 for all food and supplement manufacturers to replace the IU value of vitamin E with the mg quantity of α-tocopherol only on the Nutrition and Supplement Facts panels (Table 1). [27] [28] The WHO continues to use ‘α-tocopherol equivalents’ to calculate vitamin E value. [18]

The reference daily intake (RDI) of vitamin E is listed below:

Note: To calculate the vitamin E value for different tocochromanols, see the Vitamin E Value Converter for tocochromanols. (Login to Google and create a copy to use)

There does not appear to be competition between the vitamin E vitamers or isomers for absorption. [43] However, excessive intake of a single vitamer of vitamin E may cause a deficiency in other vitamers due to the increased production of metabolic clearance enzymes. [44] [45] CYP4F2 is the primary enzyme involved in breaking down vitamin E into more water-soluble metabolites. [46] This accelerates the excretion of many fat-soluble nutrients with a phytyl side chain, including vitamin E and vitamin K1. [43] [44] [45] For this reason it is advisable to avoid excessive intake of any single form of vitamin E (>150 mg/day), as it may cause a deficiency of other forms that are simultaneously deactivated by CYP4F2. [44] [45] [47] [48] [49] [50] [51]

The current RDI of 15 mg/day α-tocopherol is sufficient to prevent signs of overt vitamin E deficiency such as peripheral neuropathy, ataxia, or red blood cell fragility. [19] Over 95% of the US population is considered to have “normal” vitamin E levels, with blood plasma α-tocopherol above 12 µmol/L (516 mcg/dL), since α-tocopherol is found (or fortified) in many common foods. [19] [60] As a general rule, every 1 mg of dietary α-tocopherol produces a 2-3 µmol/L increase in blood plasma. [50] Blood plasma levels begin to plateau at a dosage of about 150 mg/day of α-tocopherol, as this fully saturates α-tocopherol transfer protein, and any additional intake is matched by accelerated metabolic excretion. (via CYP4F2) [51] [61]

The daily intake of more rare forms of vitamin E, such as tocotrienols is generally less than 5 mg/day, as they are not found in most common foods nor are they fortified. [60] [62] [63] [64] Research shows that the ideal intake of tocotrienols for adults is around 100 mg/day for various metabolic and cosmetic benefits. [65]

Vitamin E toxicity from high doses has not been found, as all forms of excess vitamin E are readily metabolized and cleared by the body. [43] [66] However, as mentioned earlier, prolonged intake with high doses can lead to depletion of other vitamers, such as vitamin K, which can interfere with blood clotting. [66] For this reason it is recommended to keep total vitamin E intake below 300 mg/day. [46] In addition, long-term intake of synthetic vitamin E is also associated with negative health outcomes compared to intake of plant-based vitamin E, discussed in this article about synthetic vs. plant-based vitamins.

Palm Fruit™ Vegetarian Liquid Capsules is a phytonutrient extract from red palm oil (Elaeis guineensis). Each 2 capsule dose provides 160 mg of total tocochromanols, which provides about 110 mg of tocotrienols and 30 mg of α-tocopherol. [3] [5] [67] Remember, due to the new 2016 labeling ruling, only the α-tocopherol counts towards the vitamin E value on the Supplement Facts. (Figure 3)

Palm Fruit™ Vegetarian Liquid Capsules provide a rich source of vitamin E in the form of tocopherols, tocotrienols, and other novel tocochromanols. For individuals with a vitamin E deficiency, Palm Fruit will serve as a safe and reliable source of vitamin E for rapid replenishment. In those with adequate vitamin E (α-tocopherol), Palm Fruit will serve as a rich source of tocotrienols and carotenoids for metabolic, genomic, and photoprotective benefits. [68] [69] [70] [71] [72]

[2] Nomenclature Policy: Generic descriptors and trivial names for vitamins and related compounds, AIN COMMITTEE ON NOMENCLATURE, The Journal of Nutrition 116 1 (1986) 8.