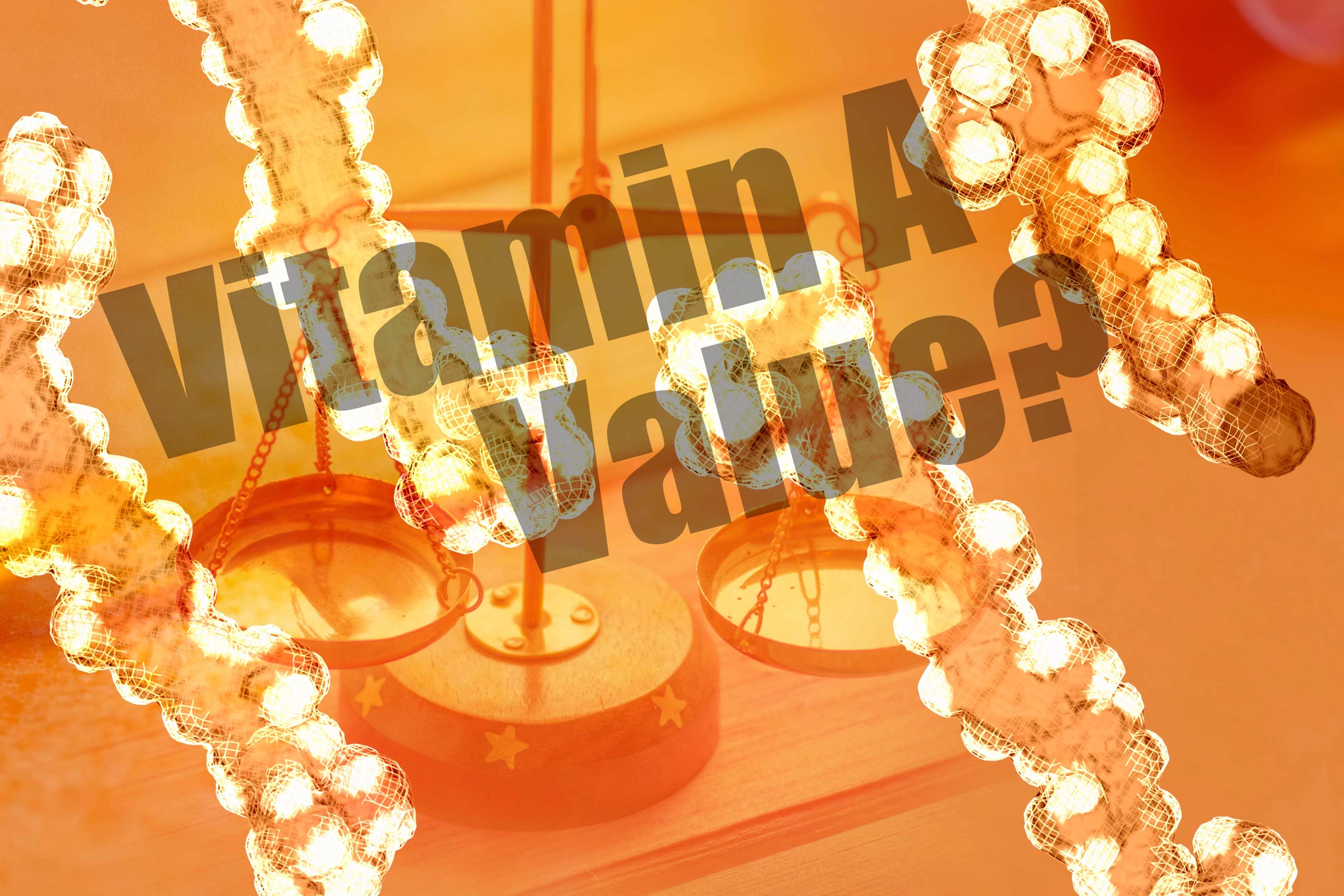 See this article for the Vitamin E value from tocopherols and tocotrienols.

This technical report will clarify the definition of vitamin A, the various forms, their absorption and bioavailability, and their contribution towards a total vitamin A value.

Vitamin A includes preformed vitamin A (e.g., retinol and other retinoids), as well as carotenoids that are capable of converting to retinol, known as provitamin A carotenoids. (Figure 1) Absorption of carotenoids (e.g., β-carotene) and their conversion to retinol varies dramatically depending on the type of carotenoid, dosage, fat intake, and vitamin A status of the subject. [1] [2] [3] [4]

Note: To calculate the vitamin A value from different carotenoids, see the Vitamin A Value Converter for Carotenoids. (Login to Google and create a copy to use)

History of Provitamin A Equivalence to Vitamin A

In the early 20th century, there was a need to establish requirements for dietary intake of vitamin A, and to highlight the lower vitamin A activity of provitamin A (e.g., β-carotene) in relation to preformed vitamin A (e.g., retinol). At that time, the vitamin A activity of a substance was based on the amount of that substance required to maintain optimal growth in vitamin A deficient rats while replenishing normal retinoid concentrations in their liver and retina. [5] The international unit (IU) is a measurement unit used for substances that have similar biological properties, but different biological potencies. In 1950, the World Health Organization (WHO) made the following IU equivalency recommendations:

Over the next couple decades, national health authorities applied non-standardized ‘nutrition conversion factors’ to determine the contribution of provitamin A carotenoids to the total vitamin A activity of foods. [6] [7] This effectively created multiple definitions for an “IU” of vitamin A depending on the accepted equivalency between an IU of preformed vitamin A and an IU of vitamin A. [6] For example, until 1974, the US Food and Nutrition Board recommended an equivalency of 2:1, while other countries such as Great Britain, Japan, and Australia adopted an equivalency of 3:1. [7] [8]

In 1967, in acknowledgement of the confusion caused by the IU values, an expert committee from the WHO and Food and Agriculture Organization (FAO) abandoned the IU and replaced it with the “retinol equivalent” (RE) in units of weight (microgram, µg, mcg) for expressing vitamin A value. [9] The expert group established the following equivalencies for 1 mcg RE:

By the 1990s most countries outside of the US had adopted the RE units. [10] [11] [12] [13] [14] Despite the fact that the US Food and Nutrition Board adopted the new RE values in 1974, the RE for vitamin A never made it to food labeling because the vitamin A in IU was codified in the Code of Federal Regulations (CFR) for food labeling. [15] From 1973 to 2016, the % Daily Value (%DV) seen on the Nutrition and Supplement Facts panel had to be based on the Reference Daily Intake (RDI) of vitamin A in the IU, which was derived from the 1968 Recommended Dietary Allowances (RDA). [7] [15]

Up until 2016, the USDA also reported vitamin A values with the original 1950 equivalence values (0.3 mcg retinol as equal to 0.6 mcg of β-carotene) in addition to adoption of “β-carotene equivalents” with a 50% activity value for other provitamin A carotenoids. [9] [16] [17] These equivalencies were also widely adopted by analytical laboratories in the US, and therefore became the equivalency factors most commonly seen in the US. [16] [18] Thus, from 1973 to 2016, the most commonly accepted value for an IU of vitamin A was:

Current RDI of Vitamin A

In 2001, the Food and Nutrition Board introduced the new retinol activity equivalents (RAE) as a successor to the retinol equivalent (RE). The new RAE more accurately accounted for the low absorption of food-based carotenoids (i.e., dietary carotenoids) in relation to the greater absorption of purified carotenoids in oil (i.e., supplemental carotenoids). [19] The following recommendations were made, where 1 mcg of RAE is equivalent to:

The conversion/equivalency values in Table 1 are only accurate if the dosage of provitamin A is relatively low (e.g., <1 mg/day) and/or if the subject is relatively deficient in vitamin A. [19] At least 98% of the US population maintains adequate vitamin A levels, primarily from widespread fortification of the food supply with retinoids. [21] Thus, for the majority of the population, the true physiological “retinol activity” from carotenoids is relatively minimal, as the body tightly controls this conversion.

For many countries outside of the US, the WHO updated the RE values with a new set of equivalencies closely matching the new RAE values. [22] As of 2004, the RE has been assigned the following values:

Note: To calculate the vitamin A value from different carotenoids, see the Vitamin A Value Converter for Carotenoids. (Login to Google and create a copy to use)

The absorption of carotenoids ranges from 1-90% due to several factors influencing the assimilation of these fat soluble molecules. [23] [24] [25] For dietary carotenoids to reach the bloodstream they must be 1) liberated from their food matrix, 2) solubilized in the intestinal lumen in order to be absorbed through the intestinal wall, and 3) packed into a lipid-based particles (chylomicrons) to be taken up by the lymphatic system.

Of the provitamin A carotenoids, β-cryptoxanthin appears to be the most easily absorbed, followed by α- and β-carotene. [26] [27] [28] [29] The cis- stereoisomers of β-carotene are generally absorbed less efficiently than the all-trans- form, but with relatively minor consequence, since β-carotene can isomerize to the all-trans- form during the absorption process. [30] [31] [32] Thus, the total carotenes that reach circulation from all-trans-β-carotene is only slightly greater than 9-cis- or 13-cis-β-carotene. [30] [31] [32] [33]

Note: Chemical stereoisomers are chemicals with the same chemical formula and molecular skeleton, but with a different spatial arrangement.

The largest variance in carotenoid absorption is seen between dietary and supplemental sources. The dietary carotenoids refer to carotenoids contained within their native cellular plant matrix (e.g., foods that are whole, chopped, puréed, etc.) which have an absorption rate ranging from 4-30% depending on the plant source, degree of processing, and occurrence of fat. [1] [2] [23] [34] [35] [36] [37] [38] [39]. Processing plant-based foods with heating, blending, or juicing enhances absorption of carotenoids as they become increasingly liberated from their cellular plant structure. [38] [40] [41] The supplemental carotenoids refer to purified carotenoids which have an absorption rate of about 90%, are not trapped in cellular plant structure, and are fully or partially dissolved in oil. [9] [28] [30] [42] Supplemental carotenoids may be derived from either naturally occurring sources (e.g., red palm oil, etc.) or synthetic sources. [28]

Soluble fibers such as pectin, guar gum, and alginate at a dose of 9 g or more can reduce carotenoid absorption by 33-43% when taken within the same meal. [47] Carotenoid absorption may also be hindered in subjects with diarrhea or intestinal infections. [48]

Once provitamin A carotenoids are absorbed into the body from dietary intake, anywhere from 2-50% may be converted to retinol. [13] [49]

The conversion of provitamin A carotenoids to retinol begins with the enzyme carotene dioxygenase (i.e., β-carotene-15, 15’-dioxygenase), which splits a carotenoid into two molecules of retinal. [50] [51] The retinal is then metabolized to retinol or retinoic acid (Figure 2). [52] The majority of the carotenoid to retinol conversion occurs in the intestinal wall or liver when carotenoids are initially absorbed, although peripheral tissues and organs will retain carotenoids and convert them to retinol as needed. [34] [53] [54]

The current RDI of (900 mcg RAE) of vitamin A is sufficient to prevent overt signs of vitamin A deficiency such as night blindness, eye dryness, follicular hyperkeratosis, immunodeficiency, etc. [19] Over 95% of the US population maintains adequate vitamin A concentrations (> 20 mcg/dL), since many foods are fortified with retinoids (e.g., retinyl palmitate). [62] In the US, about 70% of the vitamin A requirement comes from dietary intake of retinoids (0.6 mg/day) with the remaining coming from provitamin A carotenoids. [19]

There is no accepted serum concentration for carotenoid adequacy or deficiency, and thus no dietary requirement for carotenoids aside from the vitamin A requirement which can be fulfilled by either carotenoids or retinoids. [19] However, it is well known that plasma levels of carotenoids above 134 mcg/dL, equivalent to an intake of at least 60 mg/day of dietary carotenoids, is associated with the lowest risk of chronic disease and death. [63] [64] [65] [66] [67] [68] The average intake of total carotenoids in the US is only about 5–12 mg/day, coming primarily from fruits and vegetables containing lycopene, beta-carotene, lutein, zeaxanthin, and alpha-carotene. [19] [21] [69] While there is little need to supplement with carotenoids to fulfill the vitamin A requirement for most adults, there is evidence that carotenoids provide metabolic and therapeutic benefits in their own right.

Note: As mentioned in the previous sections, carotenoids are at least 6 times more bioavailable if they are suspended/dissolved in oil, and are thus referred to as supplemental sources.

An excessive intake of vitamin A in the form of retinoids (>3 mg / >10,000 IU per day) can cause Hypervitaminosis A, which can increase the risk of bone fracture, birth defects, and liver failure. [70] However, provitamin A from plant-based carotenoids has never been found to cause hypervitaminosis A, since the body tightly controls the conversion of carotenoids to retinoids. [69] [71] [72] [73] However, there is research to suggest that heavy daily alcohol consumption (~30% of daily calories) with higher levels of β-carotene (30 mg/day) may worsen the hepatotoxic effects of alcohol. [74] [75] In addition, long-term intake of synthetic carotenoids is associated with negative health outcomes compared to intake of plant-based carotenoids, discussed in this article about synthetic vs. plant-based vitamins.

Palm Fruit™ and its Vitamin A Contribution

Palm Fruit™ Vegetarian Liquid Capsules is a phytonutrient extract from red palm oil (Elaeis guineensis). Each serving (two capsules) provides 30 mg of supplemental carotenoids from red palm oil extract, making it equivalent to about 180 mg/day of dietary carotenoids. [69] Palm Fruit contains about 18 naturally occurring carotenoids, although the majority (>85%) of this carotenoid mixture is composed of α- and β-carotene, which contribute to the calculated vitamin A value of 4,026 mcg RAE (440% DV). [76]  (Figure 3)

Palm Fruit™ Vegetarian Liquid Capsules provide a rich source of provitamin A carotenoids. For individuals with a dietary vitamin A deficiency, Palm Fruit™ Vegetarian Liquid Capsules will serve as a safe and reliable vitamin A supplement for rapid retinol replenishment. In those with adequate levels of vitamin A, Palm Fruit will help saturate tissues with carotenoids, exerting antioxidant, metabolic, and photoprotective benefits. [77] [78] [79] [80]

[3] Vitamin A Requirement of Human Adults: An Experimental Study of Vitamin A Deprivation in Man. A Report of the Vitamin A Sub-Committee of the Accessory Food Factors Committee, HUME, M., KREBS, H.A., London : His Majesty’s Stationery Office 264 5 (1949) 839.

[13] Requirements of Vitamin A, Iron, Folate, and Vitamin B12: Report of a Joint FAO/WHO Expert Consultation, WHO, FAO, FAO food and nutrition series, Food and Agriculture Organization of the United Nations (1988).

[21] Second National Report on Biochemical Indicators of Diet and Nutrition in the U.S. Population, CDC, National Center for Environmental Health (2012).