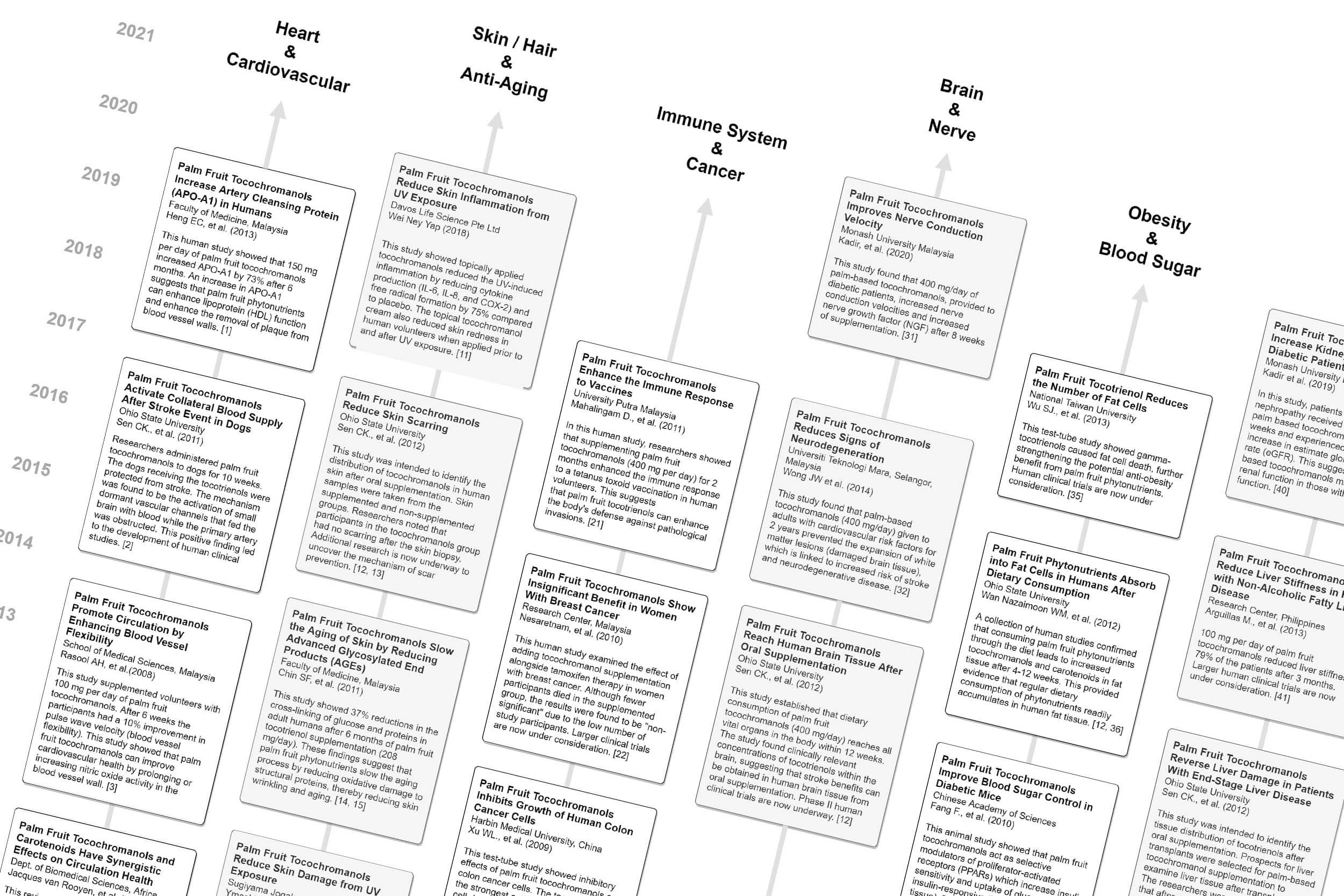 Disclosure: The information on this page has not been evaluated by the Food and Drug Administration (FDA). The information on this page is for educational purposes only and should be considered preliminary and/or inconclusive and not intended for the diagnosis, treatment, cure, or prevention of any disease. The information should not be considered as a claim for any particular food or dietary supplement. Always consult a medical professional for the diagnosis and/or treatment of a disease.

This article will show you the most significant research categories for red palm oil (palm fruit) based phytonutrients in relation to human health. Although hundreds of studies have been conducted, only the categories that have shown the most promise and have progressed towards human clinical research will be shown here.

Note: This timeline will be kept up-to-date with the latest research findings as they are published.

This human study showed that 150 mg per day of palm fruit tocochromanols increased APO-A1 by 73% after 6 months. An increase in APO-A1 suggests that palm fruit phytonutrients can enhance lipoprotein (HDL) function and enhance the removal of plaque from blood vessel walls. [1]

Researchers administered palm fruit tocochromanols to dogs for 10 weeks. The dogs receiving the tocotrienols were protected from stroke. The mechanism was found to be the activation of small dormant vascular channels that fed the brain with blood while the primary artery was obstructed. This positive finding led to the development of human clinical studies. [2]

This study supplemented volunteers with 100 mg per day of palm fruit tocochromanols. After 6 weeks the participants had a 10% improvement in pulse wave velocity (blood vessel flexibility). This study showed that palm fruit tocochromanols can improve cardiovascular health by prolonging or increasing nitric oxide activity in the blood vessel wall. [3]

This review article shows several mechanisms for how tocochromanols and carotenoids work together to limit LDL oxidation and optimize nitric oxide function in the blood vessel wall -- and that these phytonutrients work synergistically to provide benefits greater than the phytonutrients can provide on their own. [5]

Researchers found an improvement in walking distance (+46%) in subjects suffering from peripheral artery disease (PAD) after 3 months of tocochromanols supplementation (300 mg/day). Participants were able to exercise for longer periods without pain normally associated with PAD. This study shows tocotrienols may provide circulatory benefits by improving the nitric oxide and/or inflammatory response. [8]

Discovery of Cholesterol-Lowering Effect of Tocotrienols in Animals

Researchers isolated and identified tocotrienols as the cholesterol-lowering fraction from cereal grains. They found that tocotrienols lower LDL cholesterol (~20%) in chickens, swine, and quail. Attention moved towards palm fruit due to its extremely rich source of tocotrienols. Palm fruit tocochromanols (i.e., tocotrienols and tocopherols) became the major focus for future research. [10]

This study showed topically applied tocochromanols reduced the UV-induced inflammation by reducing cytokine production (IL-6, IL-8, and COX-2) and free radical formation by 75% compared to placebo. The topical tocochromanol cream also reduced skin redness in human volunteers when applied prior to and after UV exposure. [11]

This study was intended to identify the distribution of tocochromanols in human skin after oral supplementation. Skin samples were taken from the supplemented and non-supplemented groups. Researchers noted that participants in the tocochromanols group had no scarring after the skin biopsy. Additional research is now underway to uncover the mechanism of scar prevention. [12] [13]

This study showed 37% reductions in the cross-linking of glucose and proteins in adult humans after 6 months of palm fruit tocotrienol supplementation (208 mg/day). These findings suggest that palm fruit phytonutrients slow the aging process by reducing oxidative damage to structural proteins, thereby reducing skin wrinkling and aging. [14] [15]

Research with human subjects showed a 38% increase in the number of scalp hairs after 8 months of palm fruit tocochromanol supplementation (146 mg/day). The number of hairs was increased in thinning areas of the scalp in both men and women suffering from hair loss. Both human clinical trials demonstrated a significant regrowth of hair on the scalp, without side effects. [17] [18]

This study supplemented hairless mice with palm fruit carotenoids or a single carotenoid (beta-carotene) and demonstrated enhanced UV protection from the mixed carotenoids provided by palm fruit. This study suggests that the naturally occurring mixture of alpha, beta, and gamma-carotenes stabilize each other along with an antioxidant chain offering greater protection against free radicals. [20]

In this human study, researchers showed that supplementing palm fruit tocochromanols (400 mg per day) for 2 months enhanced the immune response to a tetanus toxoid vaccination in human volunteers. This suggests that palm fruit tocotrienols can enhance the body's defense against pathological invasions. [21]

This human study examined the effect of adding tocochromanol supplementation alongside tamoxifen therapy in women with breast cancer. Although fewer participants died in the supplemented group, the results were found to be "non-significant" due to the low number of study participants. Larger clinical trials are now under consideration. [22]

Researchers found that palm fruit tocochromanols inhibited the growth of breast cancer cells by 50% in test-tubes, while regular vitamin E (alpha-tocopherol) had no effect. These results suggest that the mixture of natural tocochromanols (i.e., tocotrienols & tocopherols) have a unique effect over alpha-tocopherol alone. [28]

Researchers administered carcinogenic DMBA to rats, then supplied the rats with diets enriched with either corn, soy, red palm oil, or refined palm oils. Diets with red palm oil had the lowest incidence of cancer. The red palm oil naturally contains the highest concentration of oil-soluble tocochromanols and carotenoids, and thus represents one of the first studies showing a potential anti-cancer effect from palm fruit phytonutrients. [30]

This study found that palm-based tocochromanols (400 mg/day) given to adults with cardiovascular risk factors for 2 years prevented the expansion of white matter lesions (damaged brain tissue), which is linked to increased risk of stroke and neurodegenerative disease. [32]

This study established that dietary consumption of palm fruit tocochromanols (400 mg/day) reaches all vital organs in the body within 12 weeks. The study found clinically relevant concentrations of tocotrienols within the brain, suggesting that stroke benefits can be obtained in human brain tissue from oral supplementation. Phase II human clinical trials are now underway. [12]

This early work demonstrated that palm fruit tocochromanols prevent damage to lipids and proteins in the brain at low concentrations, suggesting that dietary consumption may reach the brain in clinically relevant concentrations. [34]

A collection of human studies confirmed that consuming palm fruit phytonutrients through the diet leads to increased tocochromanols and carotenoids in fat tissue after 4-12 weeks. This provided evidence that regular dietary consumption of phytonutrients readily accumulates in human fat tissue. [12] [36]

Researchers administered palm fruit tocochromanols to rats and found that they stored less body fat after exposure to the stress hormone dexamethasone. Generic vitamin E (a-tocopherol) had no benefit. This study showed that tocotrienols may help reduce belly fat as a result of cortisol release from high stress. [38]

In this study, patients with diabetic nephropathy received 400 mg/day of palm based tocochromanols for 12 weeks and experienced a significant increase in estimate glomerular filtration rate (eGFR). This suggests that palm-based tocochromanols may improve renal function in those with impaired function. [40]

100 mg per day of palm fruit tocochromanols reduced liver stiffness in 79% of the patients after 3 months. Larger human clinical trials are now under consideration. [41]

This study was intended to identify the tissue distribution of tocotrienols after oral supplementation. Prospects for liver transplants were selected for palm-based tocochromanol supplementation to examine liver tissue after transplantation. The researchers were surprised to see that after providing the palm fruit tocotrienols, 50% of the patients no longer required liver transplants. This study initiated a stage II clinical trial to test palm fruit extract for end-stage liver failure. [12]

This small pilot study showed reversal of non-alcoholic fatty liver disease (NAFLD) in 50% of patients after 12 months of supplementation with palm fruit tocochromanols (200 mg/day). The researchers proposed that NAFLD may be a result of a nutritional deficiency in tocotrienols. [42]

Rats fed the carcinogen 2-acetylaminofluorene had less liver damage while being supplemented with palm fruit tocochromanols. This study was one of the first records for a liver protective effect from palm fruit phytonutrients, which was followed by several studies to continue identifying the mechanisms. [43]